Plant Foods as Sources of Pro-Vitamin A: Application of a Stable Isotope Approach to Determine Vitamin A Activity

The electronic version of this article is the complete one and can be found online at: http://www.tfljournal.org/article.php/20051201123813474

The general public has been aware of protein, carbohydrates, fats, vitamins and minerals from edible plants for a very long time. The unique mixture of phytochemicals in specific edible plants may be of equal importance, from the perspective of health and nutrition. A biomedical researcher describes one of the tools used by nutritionists to help decipher the web of interactions in which these phytochemicals are involved, once ingested by human beings.

Vitamin A deficiency is a serious nutritional problem throughout much of the developing world, especially among poor populations where the consumption of animal products is minimal and the diet is composed predominantly of plant-derived foods. Vitamin A is not found in plants; however, green and other colored vegetables do contain significant concentrations of pro-vitamin A carotenoids, such as beta-carotene, which can be converted to vitamin A in the human body (Solomons, 2001). At present, we do not fully understand how beta-carotene is absorbed in the human gut, especially when it is consumed in a plant source, nor do we know with certainty how much of the vegetable-derived beta-carotene from most foods is converted to vitamin A (also known as that food’s vitamin A activity). Our group at the USDA/ARS Children’s Nutrition Research Center at Baylor College of Medicine in Houston, Texas, along with collaborators at the USDA/ARS Human Nutrition Research Center on Aging at Tufts University in Boston, Massachusetts, have utilized a stable isotope method that allows us to directly measure beta-carotene absorption from specific vegetables or fruit, and to determine the extent to which this beta-carotene is converted to vitamin A in the body. The information gained through this methodology is important, because it helps us understand the potential of various foods to provide dietary vitamin A. It also provides a scientific basis for establishing food-based, dietary recommendations to assist people in meeting their daily vitamin A requirements.

Stable isotopes are nonradioactive forms of elements that naturally occur within the environment. For a given element, such as iron (Fe), different stable isotopes exist that have differing atomic masses (e.g., Fe-54, Fe-56, Fe-57, and Fe-58), with each isotope of Fe acting chemically in an identical manner. The various isotopes of an element can be separated by mass and quantified using an instrument called a mass spectrometer. Stable isotopes vary in their natural abundance or percentage in nature, and most nutritionally significant elements have at least one low-abundance stable isotope (e.g., only 0.28% of all Fe occurs as Fe-58). In human nutrition studies, low-abundance stable isotopes have been used to trace the absorption and metabolism of nutrients from a specific food source. For instance, by growing a plant on an enriched source of a low-abundance stable isotope, the plant will incorporate the isotope into its tissues and edible organs and will contain a higher percentage of this isotope, relative to all other foods (Grusak, 1997). We say that the plant has been “labeled” with this stable isotope. Following consumption of the labeled plant food by a human subject, the analysis of isotope amounts in blood, urine, or fecal samples enables the researcher to determine how much of the nutrient was absorbed from the specific food in question. It should be noted that because stable isotopes are nonradioactive, their use is entirely safe in human studies.

Although much of the existing stable isotope work has focused on mineral nutrients, it also is possible to label phytochemicals with stable isotopes of carbon (C) or hydrogen (H). This is important for a molecule like beta-carotene, which is entirely composed of C and H atoms. The approach we have taken has been to generate labeled beta-carotene by replacing several of the H atoms (atomic mass of 1) with the low-abundance stable hydrogen isotope, H-2 (atomic mass of 2). This isotope also is called deuterium, and occurs naturally at 0.015% of all hydrogen atoms (i.e., H-1 occurs at 99.985%). By replacing eight of the 56 H atoms in a beta-carotene molecule with deuterium atoms, a labeled beta-carotene with an atomic mass of 544 will be generated. By comparison, a beta-carotene molecule containing no low-abundance isotopes has an atomic mass of 536. These two forms of beta-carotene are referred to as isotopomers of the molecule. The mass-544 beta-carotene also is referred to as the M + 8 isotopomer, where M equals the mass of the unlabeled molecule. As with the different isotopes of mineral nutrients, isotopomers of a molecule have similar chemical or biochemical properties, but they can be easily discerned from one another using a mass spectrometer.

In order to label beta-carotene, plants can be grown hydroponically using a nutrient solution enriched with heavy water. Each molecule of heavy water, or deuterium oxide, contains two atoms of deuterium instead of two atoms of H-1. Plants absorb both heavy water and normal water via the root system and transport the water to their shoot organs, where the hydrogen or deuterium ions can be utilized in various biochemical reactions. Using this approach, we have successfully grown spinach, collard (Fig. 1), broccoli, carrots and other vegetables, and have achieved a labeling of the beta-carotene pool with a high yield of the M + 8 isotopomer. Because deuterium atoms are inserted randomly throughout the molecule (Putzbach et al., 2005), a range of isotopomers is produced (Fig. 2); however, we can quantify any or all of these isotopomers with a mass spectrometer (Lienau et al., 2003). 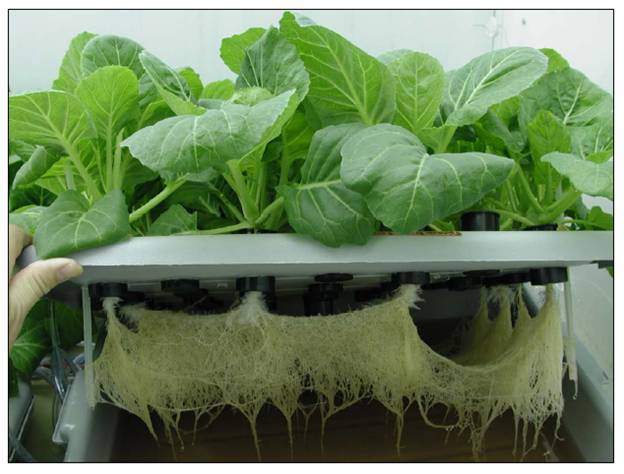 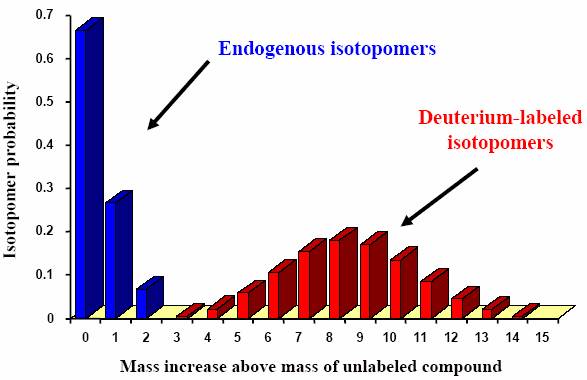 Figure 2. Isotopomer profiles for endogenous and deuterium-labeled beta-carotene. Endogenous beta-carotene is the normal form found in plants and in our bodies. The M + 1 and M + 2 isotopomers come from naturally occurring carbon-13 atoms (1.1% in nature) that can be incorporated into the molecule. The deuterium-labeled isotopomers are derived from random additions of H-2 atoms. In this figure, they demonstrate a food source in which the beta-carotene pool has been labeled at approximately 15% (the predominant isotopomer is M + 8).

The ultimate goal of these efforts is to expand our understanding of how dietary beta-carotene is absorbed from specific foods and to determine how efficiently the beta-carotene in each food is converted to vitamin A. Once we have produced a labeled food, it is fed to human subjects as part of a standard meal and at a normal serving size. Blood samples are then collected over a period of several weeks, in order to measure total and labeled beta-carotene and vitamin A in the plasma. A dose of deuterium-labeled retinoic acid also is given orally, one week after the labeled food. This compound is absorbed at nearly 100% efficiency and is converted to vitamin A in the body, where it serves as an important reference compound that allows us to calculate the vitamin A activity of the plant source being studied. It is worth noting that this isotopic approach can be used with individuals of any nutritional status (vitamin A replete or deficient) or of any dietary regime (with or without carotenoid or vitamin A sources), because all pre-existing or subsequently absorbed beta-carotene or vitamin A in the body will be unlabeled.

The Food and Nutrition Board of the U.S. Institute of Medicine has recently proposed a vitamin A conversion factor of 12 to 1, by weight, for food-derived beta-carotene (this includes all measured trans beta-carotene equivalents) (Institute of Medicine, 2002). In other words, a food that contains 12 mg of beta-carotene equivalents is believed to provide 1 mg of vitamin A to the body. However, this conversion factor is an average value, and although it is based on an extensive synthesis of the available literature, it does not represent the actual conversion efficiency of every food source, or of every food under all conditions. For instance, we recently measured vitamin A activities [mean (+ S.D.)] of 21 (+ 9) to 1 and 15 (+ 7) to 1 for spinach and carrots, respectively, when these foods were fed to healthy, well-nourished adults (Tang et al., 2005). Although these values overlap the Institute of Medicine value, they also suggest that the current guidelines may overestimate the conversion efficiencies in some individuals.

Clearly, there are many factors that influence vitamin A activity, and much is yet to be learned. It is known that processing can promote the release of beta-carotene from the food matrix (Castenmiller et al., 1999) and that dietary oils enhance its absorption (beta-carotene is a fat soluble molecule) (Brown et al., 2004). It is still unclear whether other dietary carotenoids can competitively inhibit the absorption of beta-carotene, whether malnutrition, disease, and/or other stresses might negatively impact beta-carotene absorption/metabolism, and why only a portion of absorbed beta-carotene is converted to vitamin A. Thankfully, there are techniques like the isotopic labeling approach that can help us answer many of these questions.

There is no doubt that colored fruits and vegetables are important vehicles for alleviating vitamin A deficiency in at-risk populations. This is one reason why their consumption is widely promoted. However, if more information were available on specific plant foods and their use in diverse population groups, targeted recommendations could be made to the general public and the health-related community regarding the vitamin A potential of individual fruits and vegetables. My colleagues and I are attempting to fill this information gap through the use of isotopically labeled plants. Our current efforts to assess vitamin A activities include human trials with spinach (a leafy vegetable), Golden Rice (a transgenic crop that produces beta-carotene in the rice grain endosperm) (Grusak, 2005; Paine et al., 2005), and spirulina (a cyanobacterium often used as a high-protein food additive) (Li and Qi, 1997). We will conduct these studies in both vitamin A-deficient and vitamin A-replete populations. We also are developing methods to isotopically label sweet potato, maize, orange cauliflower, and Moringa leaves for future human studies (yet to be funded).

There is much work to be done and much information to be gathered, so we are always interested to learn about novel beta-carotene rich foods, and welcome any information about new plants that deserve further attention. We also would be happy to discuss possible carotenoid-related research collaborations and possibilities for funding, with any interested parties – especially those focused on developing world problems.

The writing of this article was funded in part by the U.S. Department of Agriculture, Agricultural Research Service under Cooperative Agreement Number 58-6250-1-001. The contents of this publication do not necessarily reflect the views or policies of the U.S. Department of Agriculture, nor does mention of trade names, commercial products, or organizations imply endorsement by the U.S. Government.

Castenmiller JJM, CE West, JPH Linssen, KH van het Hof and AGJ Voragen (1999) The food matrix of spinach is a limiting factor in determining the bioavailability of ?-carotene and to a lesser extent of lutein in humans. Journal of Nutrition 129:349-355. http://www.nutrition.org/cgi/content/full/129/2/349