The electronic version of this article is the complete one and can be found online at: http://www.tfljournal.org/article.php/20080918151543875

Sickle cell anemia (sickle cell disease) is a potentially lethal, lifelong, inherited disorder for which there is no cure. Palliative care can provide some relief from the symptoms, but such treatment requires access and financial means. The penetrance of the underlying genetic disorder, a mutation resulting in a single amino acid change in the critical oxygen-carrying protein, hemoglobin, varies greatly among populations. In certain tribal populations in India, and in regions of sub-Saharan Africa (e.g. Nigeria) where malaria was, or is still widespread, as many as 30% of individuals may be carriers of the trait, and up to 4% of the population may actually have the disease. The high prevalence in these areas relates to the ironic fact that those with the sickle cell trait are actually more resistant to malaria than those without the mutation, so the selective evolutionary pressure which might otherwise keep such a disease-causing mutation at very low prevalence, is not operating in isolation. The following short paper presents encouraging in-vitro results for the anti-sickling properties of a local and commonly eaten Nigerian plant, a nut that also has substantial nutritional value.

This nutritious nut/seed may thus prove very beneficial to sickle cell subjects and could be harnessed in the nutritional management of sickle disease.

C. esculentus is the botanical name for tiger nut sedge (Figure 1), also known as chufa (European sedge). It has small, edible, nut-like tubers that are also called earth almond, ground almond or rush nut. It is a member of the Cyperaceae family, which is cultivated occasionally for its small edible tubers (2). In Africa, it is common in the northern territories and among some Togo tribes in the West, where they use it chiefly uncooked as a side dish. The nut is also produced and consumed in Cote d’Ivore and Sierra Leone (1).

Tiger nut is widely known and consumed in Nigeria by both adults and children. The nuts are either consumed raw or in the dried form, mainly as a snack (1).

According to the Consego Regulator de chufa de Valencia (4) in Valencia, Spain, the nutritional composition per 100 ml of a classical Horchata de chufas (a traditional tiger-nut milk extract), or Orxata de xutes in Valencian language, is as follows: energy content, around 66 kcal; proteins, around 0.5 g; carbohydrates, over 10 g; starch, at least 1.9 g; and fats, at least 2 g.

Work has yet to be done to ascertain the possible effect (beneficial or otherwise) of these nuts on sickle cell disease or on sickle cell subjects who may consume them .

Sickle cell disease is an inherited disorder of red blood cells characterized by life-long anemia and recurrent painful episodes. It is a potentially lethal disease, with several clinical manifestations resulting from the homozygous expression of a mutant gene (5,6). For hemoglobin-S (HbS) disease, the result is the substitution of the hydrophilic amino acid glutamate at position-6 of the beta globin chain of hemoglobin with the hydrophobic amino acid valine (7,6). The highest prevalence of the hemoglobinopathies is found in black Africa, with sickle cell trait (HbAS) and sickle cell disease (HbSS) predominating. They are also found in some Mediterranean countries such as Greece, Italy and Israel, as well as in Saudi Arabia and India (8). The prevalence of this gene disorder in Nigeria is between 20 and 25% (9,10).

The relationship between sickle cell disease (SCD) and nutrition has been reviewed (11,12,13). However, SCD remains one of the major chronic diseases in which the role of nutrition in its etiology has not been systematically addressed. Several investigators have commented on the abnormally low levels of certain micronutrients in sickle cell blood (14) and that certain dietary constituents such as thiocyanate, phenylalanine and ascorbic acid are definitely beneficial in ameliorating the symptoms (15,16).

This work explores the possible beneficial effect of C. esculentus on HbSS subjects. C. esculentus is widely consumed in southern Nigeria by SCD and healthy persons alike, and there are undocumented and unverified claims of health improvements in SCD persons who consumed these seeds regularly. The present study is an attempt to investigate the validity of such claims.

C. esculentus samples were bought from nearby markets in Port Harcourt, Nigeria, and used immediately following a taxonomical confirmation by the department of plant science and biotechnology of the University of Port Harcourt.

For the hemoglobin polymerization experiment, the heparinized blood was centrifuged at 1200 G for 10 min using an MSE minor centrifuge. The blood plasma was removed with a Pasteur pipette and the resulting erythrocytes were washed three times with isotonic saline (0.98% NaCl). The washed erythrocytes were then suspended in a volume of isotonic saline equivalent to the volume of the displaced plasma and frozen at 00C. The samples were subsequently thawed to produce the hemolysates for the hemoglobin gelation test. Three HbSS blood samples were used for the experiment.

All chemicals used were of at least analytical grade and all were products of Sigma chemical company (St Louis, Missouri, USA).

Methanol extract: The methanol extract was obtained by finely homogenizing (grinding) the tiger nut (C. esculentus) to homogeneity. Fifty grams of the product was dissolved in 100 ml of 60% methanol (v/v), left to stand for a day at 40C, and then filtered with a muslin cloth to obtain the methanol soluble extract (MSE). The extract (filtrate) was then heated for 20 min at 600C using temperature control to produce the methanol/water soluble (MWS) extract, which was used for the anti-sickling experiment.

Aqueous (water) extract: Fifty grams of C. esculentus was dissolved in 100 ml of distilled water and left to stand for a day at 40C. The extract was subsequently filtered with a muslin cloth and used accordingly for the anti-sickling experiment.

Fresh and dry samples were ground separately with a domestic electric grinder to a fineness that enabled them to pass through a 70 nm mesh sieve. The powdered samples (five each of the fresh and dry) were used immediately for proximate analysis.

The hemoglobin gelation (polymerization) experiment was based on the method described by Noguchi and Schechter (17). The underlying principle is that hemoglobin-S (HbS) undergoes gelation when deprived of oxygen; sodium metabisulphite was used as a reductant. Exactly 4.8 ml of 2% sodium metabisulphite, 0.1 ml HbS hemolysate and 0.1 ml of isotonic saline (0.98% NaCl) were rapidly mixed in a cuvette and the optical density (absorbance) readings taken at 700 nm at one minute intervals for 10 minutes using a spectrophotometer (Spectronic 20 DR; Nordson Engineering, Luneburg, Germany); this served as the control experiment. For the test experiment, 0.1 ml of the test compound (C. esculentus in dilutions of 100%, 59%, 20%) was used in place of the 0.1 ml isotonic saline and the procedure repeated as above. As a reference standard, 10 mL of the anti-sickling amino acid phenylalanine (18) was used in place of the test compound and the test conducted accordingly.

The level of carbohydrate was obtained by the difference method, that is, by subtracting the sum of the protein, fat (lipid) and ash from the total dry matter. The calorific value was calculated by multiplying the mean values of the crude protein, fat and carbohydrates by Atwater factors of 4, 9 and 4 respectively, taking the sum of the products and expressing the result in kilocalories according to the method of Edem, et al. (20).

Results of this study have established the seeds of C. esculentus consumed in Southern Nigeria as very nutritious. The dry seeds gave proximate values (%) of 7.94, 27.54, 41.39 and 21.36 for protein, lipid, carbohydrate and fiber respectively (Table 1), while the fresh seeds gave corresponding values (%) of 3.94, 19.67, 16.19 and 15.60 for protein, lipid, carbohydrate and fiber respectively (Table 1). Compared to the proximate values for some widely consumed nuts already reported in literature (Table 2), the protein level of C. esculentus (both dry and fresh) is quite low and within the range for hickory nut (3.60 g), chestnut (4.53 g), coconut (2.06 g) and pine nut (6.81 g). Cyperus esculentus, however, gave relatively high levels of fiber (21.36% and 15.60% for the dry and fresh samples) in comparison with the amounts reported in Table 2 for some other nuts. The existence of a causal relationship between the absence of fiber in a diet and the incidence of a wide range of diseases in man, notably diabetes mellitus, obesity and coronary heart disease, has long been reported (21,22,23). The consumption of significant quantities of C. esculentus would therefore not constitute a risk factor to such pathologic states.

The caloric value of C. esculentus (429.18 Kcal/100 g for dry sample) shows it could be a reliable source of energy and can thus provide a large portion of the daily requirement of 2,500 to 3,000 Kcals for adults if large quantities are consumed, as is usually the case in Southern Nigeria.

Results of the hemoglobin-S (HbS) gelation experiment (Table 3) revealed that both the methanol and aqueous extracts of C. esculentus possess anti-sickling activity, with the methanol extract having a more pronounced anti-HbS gelation activity (possibly as a result of some anti-sickling liposoluble factor). This finding holds some relevance especially towards a possible nutritionally-based therapeutic handling of sickle cell patients. The use of indigenous plants in the management of diseases has been a common practice over the years (24,25). It has also been suggested that the study and understanding of ethnobotanical information, chemical constituents of a plant and the therapeutic application of the plant-based medicine will help in understanding the efficacy of the plant as a potent remedy, extending our knowledge of the pharmacological activity, active principle, dosage and administration (24,25). C. esculentus has, in this work, been established as both nutritious and possessing anti-sickling activity, although the active anti-sickling principles have yet to be elucidated.

Sickle cell disease (SCD) remains the one disease in which the role of nutrition in its etiology has yet to be systematically addressed (11,12,13). Considering the relative abundance and nutritional quality of this seed plant (as confirmed in this work), it is suggested that sickle cell (HbSS) patients might be helped in managing their condition by consuming these seeds and/or their extracts. Further clinical work must now be performed to establish the safety and efficacy of such a regime.

The authors are grateful to the hematology department of University of Port Harcourt Teaching Hospital, Nigeria, for the provision of HbSS blood samples, and to the bio-ethics committee of the same institution for permitting the use of the blood samples. 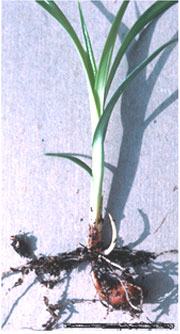 * Results are means ± SD of triplicate determinations.
† Control had saline (0.98%) in place of the extracts.