The electronic version of this article is the complete one and can be found online at: http://www.tfljournal.org/article.php/20081015155249393

This is the second article published in the Trees for Life Journal which deals with radioprotection (see Role of Rosemary Leaf Extract Against Various Doses of Gamma Radiation by Sancheti and Goyal). While it is not a major focus of this journal, radioprotection has interest for our readership and is attracting ever more attention within the scientific community. No synthetic radioprotective chemicals are available that are perfectly safe and effective. While a variety of plant extracts have been evaluated for their protective capacity, this work is still in its infancy. The following review highlights the radioprotective effects of the Himalayan Mayapple. It also illustrates the degree to which mechanism-based studies are beginning to support the purely observational work that initially brought to light the radioprotective effects of certain plant extracts.

Podophyllum hexandrum Royle (Himalayan Mayapple) was known as Aindri (“a divine drug”) in ancient times. It has been reported to be used through the ages and in modern times as a cure for allergic and inflammatory conditions of the skin; biliary fever; burning sensation; cold; constipation; cancer of the brain, bladder and lung; erysipelas; Hodgkin’s disease; insect bites; mental disorders; monocytoid leukemia; non-Hodgkin’s lymphoma; rheumatism; septic wounds; plague; and venereal warts. It has served as a commercial source of podophyllotoxin and related aryltetralin lignans and several other bioactive constituents. Podophyllotoxin finds use as a precursor for the semi-synthetic topisomerase inhibitors in the treatment of leukemias, lung and testicular cancers, dermatological disorders like warts, rheumatoid arthritis, psoriasis and malaria. It also has numerous applications in modern medicine by virtue of its free radical scavenging capacity. An extract of P. hexandrum has been shown to provide approximately 80% whole-body radioprotection in mice.

The present review highlights the state of knowledge about the radioprotective mechanism of P. hexandrum at different levels of organization in living organisms. Further, an insight into its mode of action at the molecular level, including the studies of the expression patterns of various proteins associated with inhibition of apoptosis in the spleen of male Swiss albino strain ‘A’ mice by immunoblotting, has been presented. In conclusion, the studies clearly demonstrated that P. hexandrum extract provides protection from gamma-radiation by the modulation of expression of proteins associated with cell death attributed to its ability to modulate free radical flux.

Radiation is one of the most severe causes of oxidative stress mediated by free radical flux. This flux interferes with oxidation/reduction-based physiological mechanisms existing inside the mammalian body system. The rate and selectivity of free radical mediated reaction depends primarily upon several factors: the concentration of radicals, the state of delocalization of electrons, the half-life of free radicals and weak bonds of nearby bio-molecules. Radiation protection is an area of great significance due to its possible applications in planned radiotherapy as well as unplanned radiation exposure (1,2). Research in the development of radioprotectors worldwide has focused on screening a variety of chemical and biological compounds. Various drugs from natural or synthetic origin, i.e., antioxidant cytoprotective agents, immuno modulators, vitamins and DNA binding molecules, have been evaluated extensively for their radioprotective potentials in both in vitro and in vivo models (1,3,4,5,6). However, the fact remains that there is not a single radioprotective drug available which meets all the prerequisites of an ideal radioprotector, i.e., produces no cumulative or irreversible toxicity, provides effective long-term protection, remains stable for a number of years without losing shelf life, and can be easily administered (7,8). In view of this, the search for less toxic and more potent radioprotector drugs continues.

Herbal drugs have been utilized since ancient times for curing various diseases and other disorders. Even today, more than 70% of the world’s population still depends on plant-based remedies to meet their health care needs (9). Various plants have been reported to be beneficial for free radical-mediated conditions in humans such as arthritis, atherosclerosis, cancer, Alzheimer’s disease, Parkinson’s disease, aging and inflammatory disorders. It is, therefore, logical to expect that plants may contain groups of compounds that can protect against radiation-induced reactive oxygen species (ROS) and reactive nitrogen species (RNS) mediated damage (7,8).

Podophyllum hexandrum Royle (Himalayan Mayapple), is an herb that grows at about 4000 meters of altitude in the Himalayan region (Figure 1) (10). P. hexandrum has been investigated extensively for its radioprotective capabilities in recent years, including free radical scavenging, time and dose-dependent inhibition of apoptosis (programmed cell death) and cell cycle arrest-related activities in both in vitro and in vivo models (7,8). The plant is an endangered species and included in the Red Book. In vitro propagation for mass multiplication of P. hexandrum has been recently reported (11). Besides its traditional uses (10), methanolic, hydro-alcoholic and chloroform extracts of P. hexandrum have been reported to render approximately 70-95% radioprotection in mice when administered 1-2 hours before lethal whole-body 10Gy radiation (12,13,14). To achieve radioprotection, recovery of damaged cells after radiation exposure and minimization of cell death by inhibition of apoptosis is an inescapable necessity (15,16,17,18,19). P. hexandrum has been reported to contain a number of bioactive molecules including flavonoids and lignans (10,20,21,22). 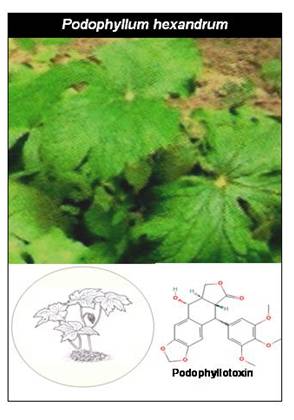 Figure 1: Podophyllum hexandrum (syn. P. emodi); common names - Aindri, Himalayan Mayapple, Devil’s apple, and Duck’s foot; low to the ground with glossy green, drooping, lobed leaves on its few stiff branches, with a pale pink flower and bright red-orange bulbous fruit; propagated by seed or by dividing the rhizome; tolerant to cold temperatures but not to dry conditions. In Eastern Asia, it is found from Afghanistan to China and through the Himalayan ranges.

Many flavonoids and lignans are already known for their antioxidant action and anti-apoptotic potential, and thus contribute towards radioprotection (21). Several mechanisms have been proposed to explain the radiation protection observed, following administration of P. hexandrum extract, such as free radical scavenging, stabilization of mitochondrial cell potential, regulation of cell cycle activities and time dependent apoptosis (12,13,14,15,16,20,21,22,23,24,25,26,27,28,29,30,31,32,33,34,35).

P. hexandrum exhibited both anti-cancer (pro-oxidant ability) and radioprotective (antioxidant ability) effects respectively depending upon the dose administered (1,20,21,24,29). The pro-oxidant effects are observed in the presence of metal ions by virtue of the presence of some aryltetralin lignans (22), further supporting DNA fragmentation ability at the in vitro level (35). At specific radioprotective doses, it exhibited significant antioxidant effect as summarized in Table 1.

We have recently reported that the mode of protection by P. hexandrum at the molecular level includes the modulation of protein expression [associated with cell death (apoptosis) and DNA repair)] by P. hexandrum administration 200 mg/kg.b.wt. i.p. 2 hrs. before 10 Gy irradiation (17,18,19). The most striking observations indicated that as a result of P. hexandrum extract treatment in mice, the expression of heat shock proteins, especially HSP-70 along with its transcriptional factor HSF-1 (heat shock transcription factor; a protein regulates HSP-70 synthesis) was increased significantly as compared to the mice treated with radiation (10 Gy) only. Heat shock proteins are cytoprotective in nature and have been reported to be increased under various environmental stresses such as increased temperature, ionizing radiation and chemical toxicants (17). The overexpression of HSF-1 suggested transcriptional level induction of heat shock proteins in the spleen of mice treated with P. hexandrum extract. The expression of phosphorylating enzymes (proteins regulating phosphate group transfer to other functional proteins) such as PkC, MAPKAP Kinase-2 was also observed to increase in the mice spleen after P. hexandrum treatment (with or without irradiation), as compared to irradiated control suggesting the possible role of phosphorylating enzymes in the signal transduction pathways that is initiated upon P. hexandrum treatment (17,18,19).

A strong inhibition of Apoptosis Inducing Factor (AIF - a cell death promoting protein) expression in the group of mice showed overexpression of HSP-70 upon P. hexandrum treatment (17). On the basis of a previous study (36), it was suggested that P. hexandrum treatment initiates an antagonistic interaction between AIF and HSP-70 expression and thus suppresses the apoptotic molecular cascade thereby protecting DNA fragmentation. The anti-apoptotic effect of HSP-70 can be attributed to the ability of P. hexandrum to provide protection to chromatin from proteases and nucleases, which are well known apoptotic markers (17,18,19).

The role of nuclear factor kappa beta (NFkb) has also been studied extensively in apoptotic regulation NFkb-Ikb complex and was found to be stable in the cytoplasm. However, under radiation stress Ikb2 gets phosphorylated by enzymes like Pkc and consequently free NF-kb moves towards the nucleus, binds with DNA, and initiates a variety of transcription at times leading to induced cell death (37,38). The expression of NF-kb was found to be induced in the cytoplasm upon P. hexandrum treatment (+/- irradiation), but it was found to be translocated into the nucleus. Podophyllum hexandrum treatment inhibited the translocation of free NFkb from the cytoplasm to the nucleus and could explain its anti-inflammatory effects. This effect may have further lead to down-regulation of p53 and up regulation of Bcl-2 protein expression, which may have possible contributions toward reduction of apoptosis and enhanced cell proliferation. Increased expression of Bcl-2, and HSP70, observed following P. hexandrum treatment (+/- irradiation), suggests a role of P. hexandrum in stabilization of the mitochondrial membrane potential leading to inhibition of membrane permeability (36,39). This prevents release of cytochrome C, leading to inhibition of apoptosis and thereby offering protection against radiation-mediated damage to the cells in conformity with the earlier observations (40). The induced expression of Ras-GAP directly demonstrated the activation of Ras-related protein R-Ras in the animals treated with P. hexandrum extract (+/- irradiation), indicating enhanced cell proliferation.

The expression of proliferating cell nuclear antigen (PCNA), an important cell proliferation marker in the cell system, was found to be enhanced in the spleen of mice treated with P. hexandrum (with or without irradiation), further demonstrating improved cell proliferation and eventually survival. P. hexandrum treatment (with or without irradiation) induced the molecular expression of the Poly (ADP-ribosyl) DNA polymerase (PARP) and down-regulated the expression of caspases and their transcription regulators (i.e., Caspase Activated DNAase), further indicating improved DNA repair and significant inhibition of the apoptosis in the mouse model system (17,18). A summary of the radioprotective action modulated via modulation of expression of proteins is shown in Figure 2. 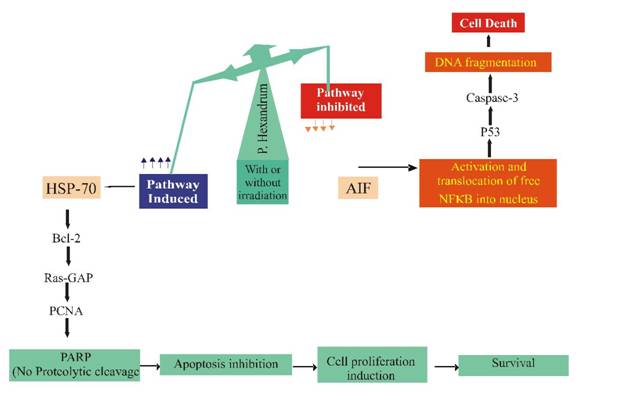 In view of its acceptable therapeutic index and a significant dose-reduction factor, P. hexandrum is a promising candidate plant for development of radioprotective drugs. Since it is an endangered plant, the interesting lead of usage of Trametes hirsuta (an endopyte) for mass production of precursors of radioprotective formulation (41) needs to be further pursued for upscaling. Further studies to characterize the total profile of gene expression (up or down regulation) by cDNA micro-array and the effects of P. hexandrum on protein expression (proteomic profiling) will help unravel the intricate mechanisms of signal transduction pathways operating at the molecular level. Such data will help in the development of novel radioprotectors for human use.

In conclusion, P. hexandrum acts in a holistic manner at various levels. Its administration on mice prior to irradiation leads to a dramatic enhancement (~80%) in survival. At the molecular level, it induces pro-survival protein and DNA repair protein expression while down-regulating the expression of proteins associated with induction of apoptosis. These activities are congruent with the in vitro free radical modulating ability of rhizome extracts of P. hexandrum.

The authors express their sincere thanks to all the past and present workers of radiation biology laboratories of INMAS and Natural Plant Product Division, Regional Research Laboratory, Jammu who have either originated the work quoted in this mini-review or have given them the benefits of their experiences of studies on Podophyllum hexandrum.